I was recently asked by a SSAS developer about how to set up a role-playing dimension so I did a brief demo to show how to set it up. In this post, I am document the steps to help you get started:

What is role-playing dimension?

1. Open SQL Server Data Tools and SSAS project that you are working on.

2. Go to Data Source Views from the solution explorer.

3. Make sure that the relationships are specified between dimension (e.g. date dimension) and Fact Table (e.g. Fact Sales). Example: If you’ve OrderDateSK and ShippedDateSK in your fact table, then establish a relationship between the both columns with the Primary Key of the Date dimension. 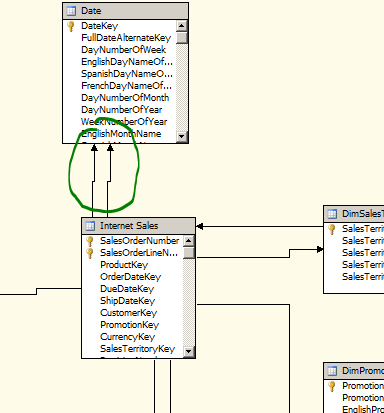 Note: If you do not have the relationships specified in the data source views, there’s an alternative to go to dimension usage for a cube and setup role playing dimensions. since this is targeted to get you started, I am not covering the steps for that.

4. Now go to the Dimensions section in the solution explorer and add a Dimension that uses the existing data source view from step #3.

Now, if you don’t have a cube created yet then you can use the cube wizard if you want and as long as you have the relationships specified at DSV’s, it should create a role-playing dimension. 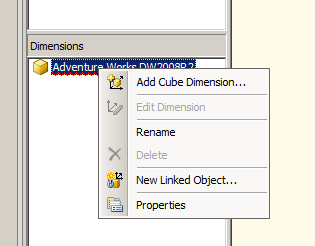 Note: for the demo I didin’t rename the dimension attributes but you do all that good stuff too when you are building the cube for users!

In this post you got started on how to add a role-playing dimension in a SSAS cube.