For time intelligence in SSAS Tabular models, it’s important to mark a date table. So, how do you do that?

Here are the steps:

1. After you have the data imported in a table, in the model designer, select the date table

2. Also, make sure that necessary relationships are created between date table and fact tables.

4. A dialog box should ask you for a unique identifier of the date table, so it could be a date column which has the unique columns for the date table that you imported.

After you do that, you’re all set to go! I hope this helps.

There’s a Power Pivot Model. It imports some number of columns from a table. Now, there’s a need to import an additional column to this table. How do you do that?

Here are the steps:

4. From here, You can add additional columns:

5. click on save and that should add the column to your model:

Make sure you have the latest Power Pivot version. You can read this: http://parasdoshi.com/2013/06/04/excel-2010-how-to-check-the-installed-version-of-powerpivot-and-whats-the-latest-version/

#2: How about changing the data source & pointing to new cube/database? It’s very helpful when you switch between QA, Dev or PROD servers. Here are the steps:

you can do that too! Go to Design > Existing connections > Select Connection > Edit > Make changes > Test it! > Save > “Refresh”. Any Problems? No? Great. That’s Done!

Related Posts:
How to add a column in an imported Table while developing SQL Server 2012 Analysis services Tabular Model

In this blog post. I’ll help you get started w/ implementing dynamic security with row filters in Tabular Models.

We’ve users that connect to a Tabular Model via Excel for Data Analysis purposes. One of the analysis that they do is Countries VS. Total Margin:

What we want to do is restrict someone from Europe to see data only about France, Germany and United Kingdom

4) Under the Row Filters, for the Geography Table, enter the following code:

How to edit code for your scenario? change the [country region name] to your column(s) and also change the values

11) As you can see, since the role Europe was selected for testing purpose in step 8 –  ONLY France, Germany and UK data is shown in our test! This means that our row filters are working perfectly!

I hope this tutorial helps you get started on implementing dynamic security in Tabular models.

Do not get intimidated by the long title – it’s not as complex as it sounds! So what am i talking about? Recently, I was developing SQL Server 2012 analysis services Tabular Model (referred to as ‘model’ from now on) and during development I realized that I need to import a column for a table. Let me give an example of what I am talking about:

Consider In the data source there’s a table named ‘Date’ with 15 columns, But for the model I needed only few columns – So I imported only 5 (out of 15) columns from this table:

Now During development I figured I need one more column which I had not imported before. Let’s call it FullDateAlternateKey

So How do you add the column ‘FullDateAlternateKey’ in your model during development?

Turns out, It is very simple. This is how you do it: 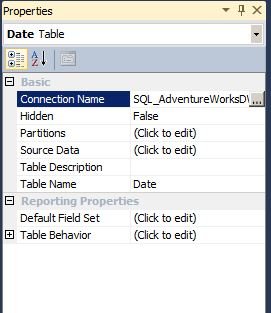 4. Now here click on ‘..’ button after you select the ‘Source Data’ field from the Basic Properties 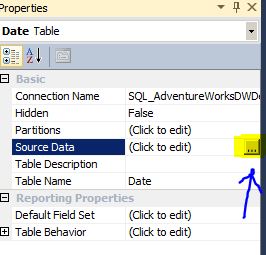 5. You’ll see a ‘Edit Table Properties’ dialog box. Here you check the column that you wish you import to the model. In my case, I checked the box for the column ‘FullDateAlternateKey’:

Allow it few seconds and you would see the column in your table! Didn’t I tell you – It’s very simple!

That’s about it for this post. So next time, You need to import a column while developing the model, do not worry – it’s just couple of clicks. But, Even though I was able to add a column later, I had to look at the relationships – create one relationship – make sure other things were right. In short – It was more work. So it’s better that you select the columns that you want in the first place. But If the need arises, you can always add columns (and even remove them) via Table properties. I hope it was helpful!