If Total number of medals (Gold + Silver + Bronze) won at Olympics is a parameter for measuring the success, then 2012 was India’s Best Olympics Ever! See: 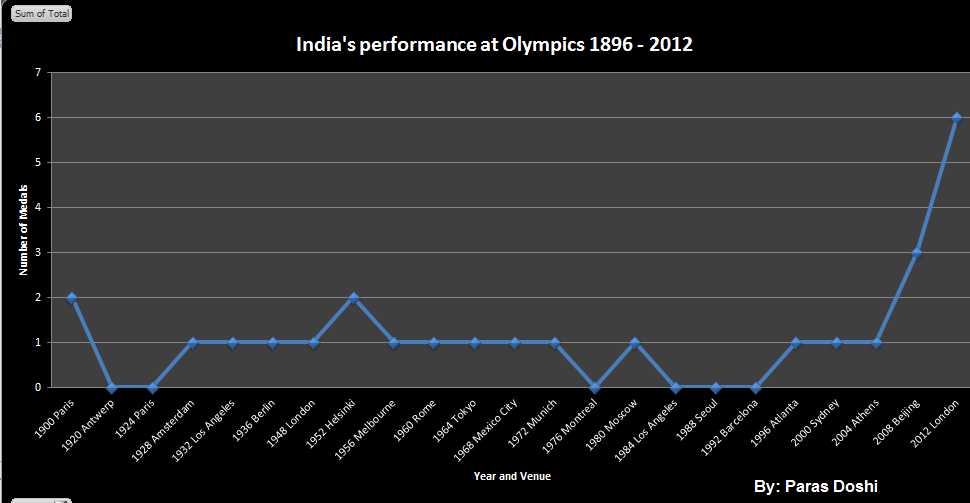 What do you think?

It was 11th August 2008, a day on which India’s Abhinav Bindra got first ever individual gold medal in 10m air-rifle event. He has made us Indians proud and has ended a long drought. Bravo! Abhinav…
Though this news makes you happy, the overall performance of India at Olympics is not at all encouraging.
There are no official statistics with me but there is a little doubt that on per capita basis India finishes last in any Olympic tally. Dead last. Commentators blamed our Olympic shortfall on the lack of training infrastructure’s in India, the low priority we put on sports as a society and the Indian physique. But I believe this is not entirely true. Here’s why:
Whatever it is that keeps India from Olympic gold,it certainly isn’t a shortfall in the Indian gene pool. Take any Olympic event and you can see that India is rich in future champions but only if we look in the right places.
If you have visited an Indian construction site,You will find many potential gymnastics champion. I recently saw a man walking across thin planks on the 15th floor of a building. He did this with no safety. Bring that man down 200 feet and put him on a four-foot high balance beam and surely he will dance bollywood tunes on the beam. India could easily field a gymnastics team from our construction sites.
Now, Take the rickshaw pullers, living on a high protein and carbohydrate diet of dal and roti, these men transport riders in 40-degree weather for 14 hours a day, seven days a week. Take the best among them and train them for Tour-De-France as training for Olympics. Who would you think will have a harder time switching places- rickshaw pullers or lance Armstrong? My bet…Mr.Lance…
Our fisherman sail three months of the year in the hardest monsoon conditions.Brutal rain don’t hamper these rough-and-tough sailors. Take the best of these men and train them for three years and they will be formidable Olympic contenders.
Likewise we can bet on men and women working at the construction sites, They can be seen lifting pounds of brick and dirt onto their head…watch there motion…they can win us weightlifting medal.
Each year,the best American athletes go to train in Colorado 5,000 feet above sea level as high altitudes makes the lungs stronger. If we take our best and train them in Leh, 14,000 feet above sea level, imagine what supermen and superwomen we may develop.
The Indian countryside and cities are replete with future Olympians. These men and women train daily in the hardest of conditions with simple diets. Without a doubt, with proper training and infrastructure,these men and women will add to our Olympic golds.
It’s a shame that world has missed 100 years of Indian Olympic prowess; it would be a travesty if the world misses another 100 years.

[This Article was Published in ISTE nirma’s Annual Magazine]