If you are not signed up already, then consider signing up! With that, And here’s a Quick walk-through on how to Join a VC:

b. switch to MyChapters section 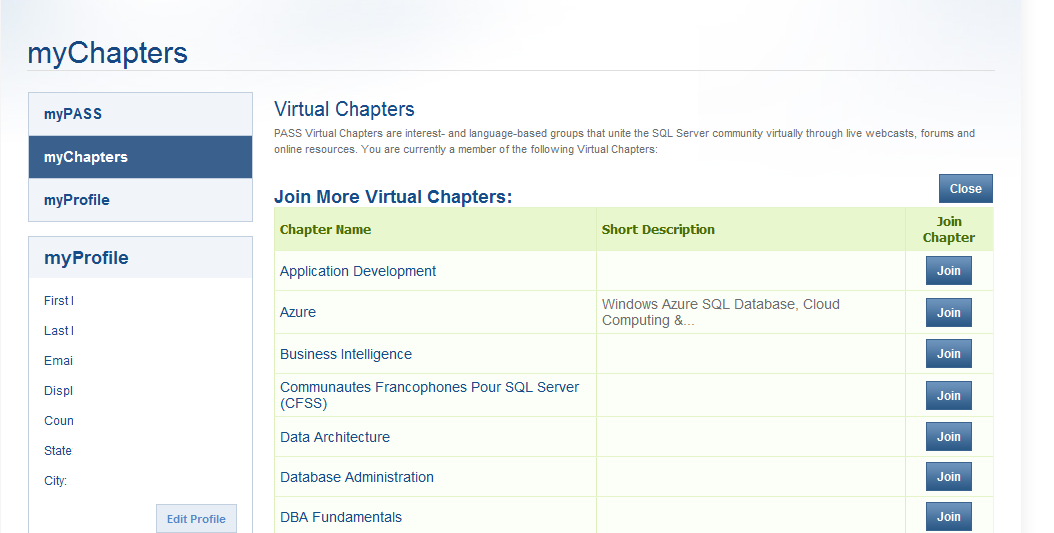 And just getting the word out about the Azure VC’s next meeting on Dec 13th 2012 – 12 noon EST, Azure VC has a meeting, Details here:  Azure PASS VC Next meeting: Kung Fu Migration to Windows Azure SQL Database – I hope to see you there!

Summary: As cloud computing becomes more popular and cloud-based solutions the norm rather than the fringe, the need to efficiently migrate your database is crucial. This demo-filled session will discuss the tips and tricks, methods and strategies for migrating your on-premises SQL Server databases to Windows Azure SQL Database, AKA SQL Azure. Focusing primarily on SQL Server Data Tools and the DAC Framework, this session will focus on how these tools can make you a kung-fu migration master.

About Scott: Scott Klein is a Corporate Technical Evangelist for Microsoft focusing on Windows Azure SQL Database (AKA SQL Azure) and related cloud-ready data services. His entire career has been built around SQL Server, working with SQL Server since the 4.2 days. Prior to Microsoft he was a SQL Server MVP for several years, then followed that up by being one of the first 4 SQL Azure MVPs. Scott is the author of over ½ dozen books for both WROX and APress, including Pro SQL Azure. He can be found talking about Windows Azure SQL Database and database scalability and performance at events large and small wherever he can get people to listen, such as SQL Saturday events, local SQL Server user groups, and TechEd.

How to Join Azure PASS VC’s?

If you want to stay updated on meeting announcements, please consider registering on PASS’s website and Joining our VC:

a. switch to MyChapters section 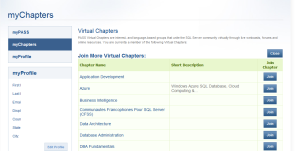 I look forward to seeing you at next Azure PASS VC’s meeting!

Question: Is there a “per transaction” cost for Windows Azue SQL Database (SQL Azure)?

I recently answered the question on MSDN forum where the question was about Transactions and the associated cost in SQL Azure. As of now, There is no “per transaction” cost associated with SQL Azure. There are two parameters that affect your SQL Azure Bill: 1) Database Size 2) Outbound Data Transfer and an example of an outbound transfer would be data access by an application hosted outside of your Azure DB’s data-center.

If you want to read more about SQL Azure pricing, here’s the official resource:

And here are some of the blog-posts that I’ve written on the same topic:

SQL Azure: Indexes are very helpful but they cost $Money$

I normally Blog about the answers that I give out on MSDN forums. The answer on MSDN forum is generally brief and to the point and in the blog post – I expand it to cover related areas. Here are the questions for which I didn’t choose to write a blog. So I am just going to archive them for now:

SQL Azure has been evolving at an amazing pace. Here is a list that summarizes the evolution till June 2012:

SQL Azure reporting services CTP is now open for all!

SQL Azure DATA SYNC CTP is now open for all!

Following updates where not added in July 2011 and where later added in September 2011:

Foundational updates for scalability and performance

Support for Multiple servers per subscription

Update on project Houston, A silverlight based app to manage SQL Azure databases

Support for database sizes up to 50 GB

With all the news about “Big Data”, I had a question:

Where does Big Data come from?

So I researched and here are the Big Data “Sources” that I found: 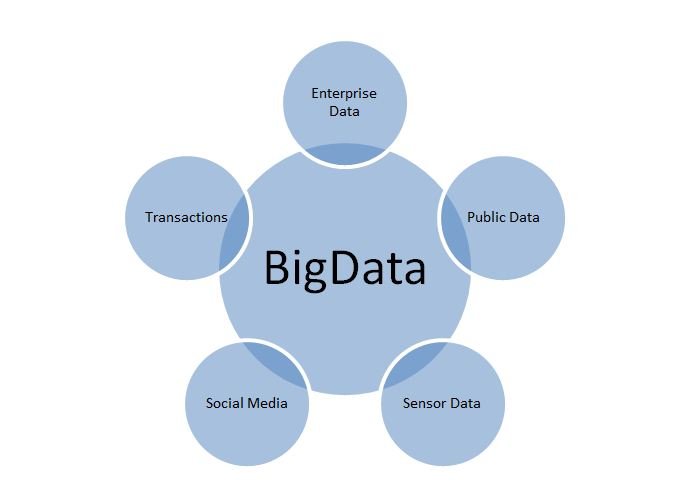 Am I missing anything? Please feel free to point those out!

Update [11 July] : Claytonbingham adds “Academic Data” to the list, which I think sometimes can also be referred to as “scientific data” (Thanks Claytonbingham! please refer to comments section for his thoughts)

even though we are data-rich – we are information (insight) poor.

My point being, that tons of information PRODUCED by [customers, partners, critics, employees..] GATHERED from [Twitter, Facebook, Linkedin, Blogs…] is NOT useful in it’s raw form. To take actions based on all these data-points – what we need is a way to categorize data (filter data) which would help the decision maker in seeing only SMALL part of data-set he/she needs for performing that particular analysis.

How would you solve it?

Thinking of writing your own Sentiment Analyzer? awesome, & Good Luck!

Any-who, may be you know it’s not straight-forward to answer the above question using raw twitter data.

But here’s the thing you could use Third-party tools to solve the problem. Don’t get me wrong, I am not asking you to ignore them. But here’s how Microsoft Social Analytics helped me solve the above problem: 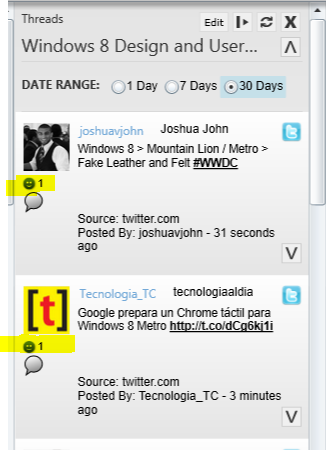 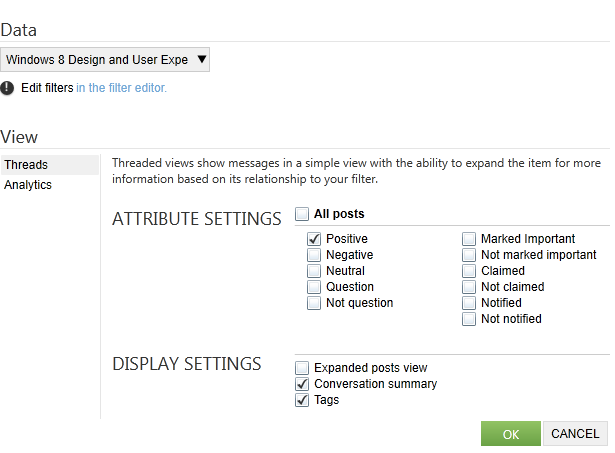 And as you can see there are more than one ways you can slice/filter your data to provide a view that is best suited for a particular analysis assignment.

2. Apart from this nicely designed web based engagement tool, you can integrate the information into applications using Social Analytics API.

Following the announcements at “Meet Windows Azure” event, we now have three options to run SQL Server on CLOUD; They are:

And apart from these options,

1. SQL Azure reporting is generally available and backed by SLA

2. You can now run SQL Server on VM roles

3. Azure was rebranded a while back but quick reminder: SQL Azure was renamed to Windows Azure SQL Database and so in the “new” portal – you’ll see “SQL database” instead of SQL Azure.

I’ll blog about these features as and when I get a chance to play with it.

Up until April 2012, the only way to run SQL server on cloud was “SQL Azure”. But recently AWS announced SQL Server on Cloud. Good news? Probably. it’s always good to have more than one option. So for those who are new to world of AWS, here are few tips before you get hands-on:

1) The way RDS works is that you spin up “db instances”. So here you specify the machine size that would “power” your database. And remember that the type of instance you choose would directly affect your bill.

3) understand costs like: cost to back-up database PLUS data-transfer cost.

4) Understand the difference between “Bring your OWN license” and “license included” (Express, Standard and web only. Currently enterprise edition not included here) model in RDS SQL Server

5) and unlike SQL Azure, RDS SQL Server charges on a “per hour” basis.

Note the date of this post: 15th may 2012. Things change very fast, so readers-from-the-future please refer to official documents.

BTW, here are the few blog posts from the web-o-sphere:

1. Expanding the Cloud for Windows Developers