Problem Statement:
How do you use SQL Server Reporting Services (SSRS) expression to get sub-string from the inputted text?

Solution:
I am going to show you few SSRS expressions that you can use in your SSRS reports: 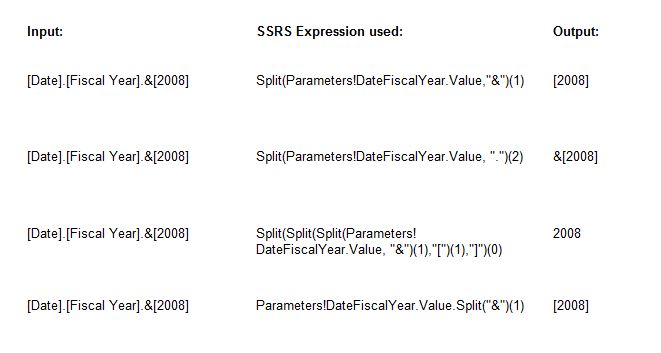 Here’s the same in a text:

Conclusion:
In this post, you saw how to use the split function in SQL Server Reporting Services (SSRS) expressions to get a sub-string.

In MDX, How to search for a sub-string using something similar to LIKE operator in SQL?

here’s an example using Contoso Sales Cube, please use this to get started for your scenario:

Note the use of INSTR function.

Also,
if you are looking for NOT LIKE then replace >0 with =0 and you should get the desired results.

Conclusion:
In this post, you saw how to write a MDX query that does sub-string search for you similar to LIKE and NOT LIKE operators in SQL.

Need a chart on a SQL Server Reporting Services chart with a secondary axes.

Need measure #2 on a secondary axes:

1. In the Design Mode > Open the Chart Date Pane > For Measure #2, navigate to Series properties: 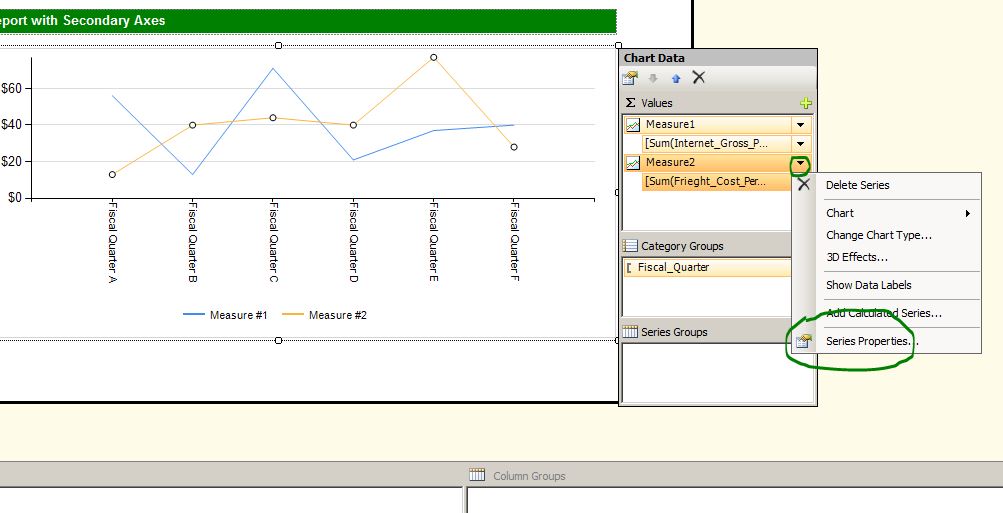 2. From the Series Properties Dialog box, navigate to “Axes and Chart Area” and choose the option “Secondary” under vertical axes. 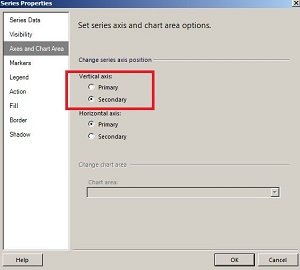 3. Click OK to go back to the design mode and preview the report to test it:

4. Make sure to rename the axis title of the secondary axis, format the number to make it consistent with the report layout.

In this post, you saw how to add a secondary axis on a SSRS Chart.

How do I change the query that’s being used to populate tables in SSAS Tabular Model?

Here are the steps that you need to follow:

2. On the Edit Table Properties, you can change the query. you can also change the tables if that’s what you have used using the “switch to” box on the right side of the dialog box. 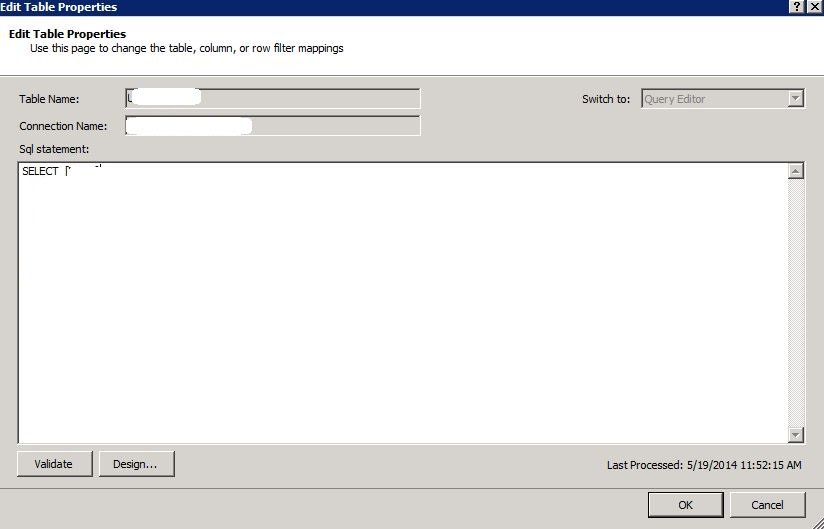 3. If you need to change the server name or instance, used then you will need to modify the connection, for that go back to menu bar and click on Model > Existing Connections. you should be able to edit the connection from here:

In this post, you saw how to change the query used for the tables in SSAS Tabular models.

The goal of this blog post is to share a quick tip on SQL Server Reporting Services (SSRS): How to add Trademark TM special symbol in Text?

In SSRS, you can put following code in the Expressions:

what an inspiring keynote by David McCandless! Here are some the things that I noted:

1. Play with your data, get your hands dirty

"Data is the new oil … but perhaps data is the new *soil*, where you can get your hands dirty, build & nurture" – @mccandelish #passbac

2. set the context while communicating what data is trying to tell.
Example: China has the largest army but compared it to their population they are 120ish! So measuring just the army size does not give you necessary context & sometimes it can meaningless

4. Make sure your data is true & keep your personal bias out of analysis.

5. Other than making sure that the data integrity is achieved in visuals, they should be interesting and functional.

6. Design is about removing unwanted things & distilling the visual to it’s functional essence.

You can check out David’s work at http://www.informationisbeautiful.net/ 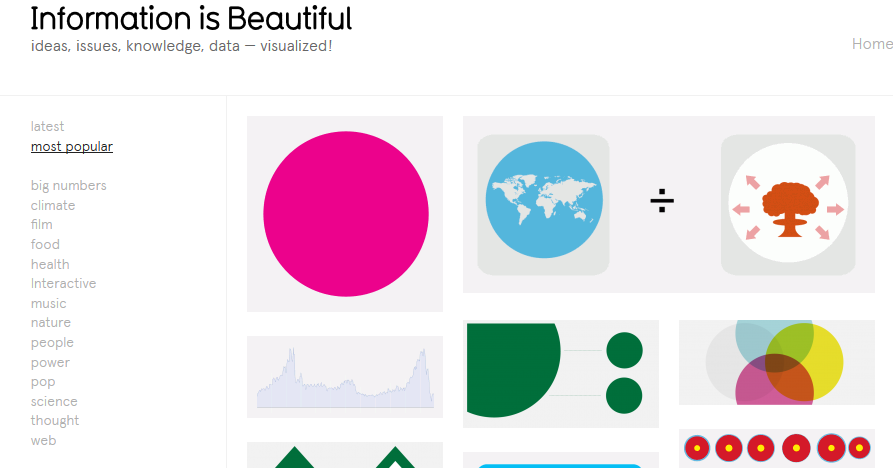 I’m at the Business Analytics conference and I thought of sharing the news that I get to listen here!

Then they shared some user adoption data…

They use Power BI to track user adoption of Power BI.

Power BI demo contest: if you’ve not seen some of the amazing demo’s that were submitted during the Power BI demo’s then you can read them here: http://blogs.msdn.com/b/powerbi/archive/2014/02/15/give-a-high-five-to-the-top-five-finalists-in-the-power-bi-demo-contest.aspx

Reporting Services will run natively in PowerBI by the end of this summer. #passbac #happydance

BI for the masses

It’s great to see Microsoft committed to create easy to use tools!
The Age of Classic BI -> The Age of Self Service BI -> The Age of Data.
In the new age, everyone in the organization who is curious will have tools that they can use to get to the answers!

Analysis of Tourism in Hawaii. It was really entertaining 🙂

And I just saw a Tree maps in Power View!

Drag items from one chart to another!

you should now be able to drag items from one chart to another chart!

Combine two charts into one!

In part #1, I wrote about why is it important to enable business users to create their own BI reports.

In part #4, I wrote about Sample Business Intelligence Training content.

Here are more details about each topic:

Send out a simple survey at the end of the training session. Here’s a sample survey:

As users use the BI system, they would have questions that need timely response. So IT managers need to think about setting up a user support system. Someone from the BI team could take on the responsibility answering user’s question. They also need to think about how to integrate corporate IT support system with the user support for the BI system. if need be, a dedicated user support & documentation site can also be created. Note that resolving user queries is as important as giving them training!

Also necessary documents (/videos) need to be provided to user for their future reference.

BI system logs (Analysis services Trace/reporting services logs) can be used to monitor usage. It’s important to use data to track the usage of the system to see the return of investment for training efforts.

recognizing your followers who do great job is a great tactic to attract more followers!

Demo user-created BI reports in trainings, meetings with project sponsors, team meetings and recognize the effort of the user. In some cases, you could invite the creator to demo their report in a training session – and you got one more trainer to teach your users!

here’s the complete checklist for “How to Train your Business users to Business Intelligence reports?”

And here’s a slide-deck that shares the same information:  bit.ly/trainbusinessusers

I hope this series gave you a framework to train your business users to create their Business Intelligence reports.

In part #1, I wrote about why is it important to enable business users to create their own BI reports.

2. Show them the end goal & then walk through the steps to get there

Here’s a sample training content for a 4 hour-long excel training session (divided into basics & advanced) including hands on lab time. 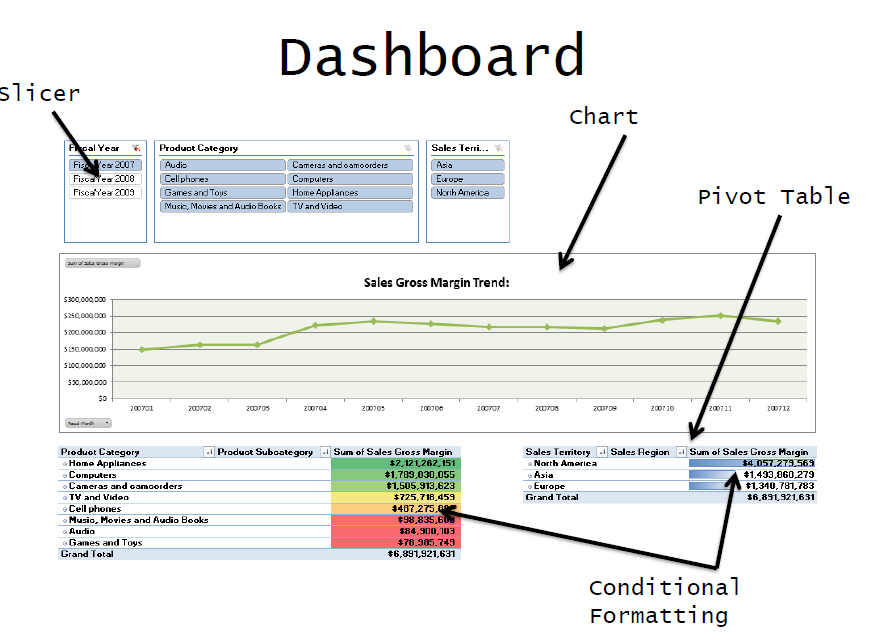 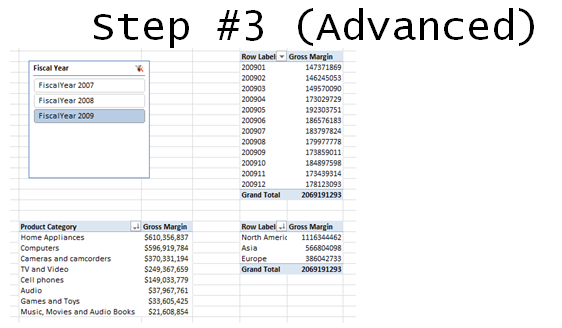 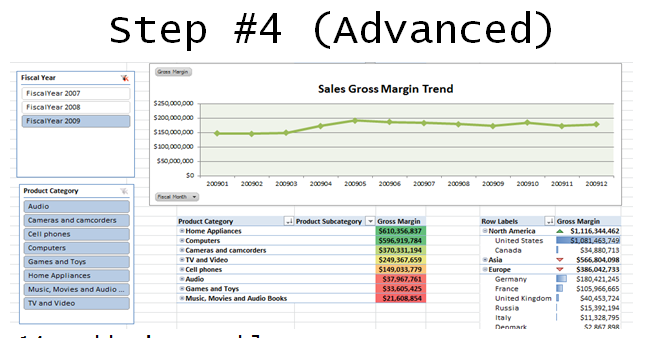