This week, Microsoft announced price reduction for Windows Azure compute and storage. Read more here – And even AWS announced price reduction too. Read more here. So it’s great to see neck to neck competition between Azure and AWS. And this is what is great about an economy that is not “monopolized”. To sustain, both Azure and AWS need to compete PLUS they compete with other cloud vendors that are out there too. Hopefully, other cloud vendors would also come up with an aggressive pricing strategy. Also, such competition among vendors would spur innovation and we would see “more features” coming out their factories more often than before (Yay!). And guess what, Who’s the winner? WE the CUSTOMERS!

Also, I noticed a pattern in both announcements that said “We are glad to pass along the savings to customer”. This seems to pointing to the fact that since cloud computing adoption has increased and cloud vendors benefit from Economies at scale – They pass the savings to the customers. And this acts as a catalyst for more adoption! 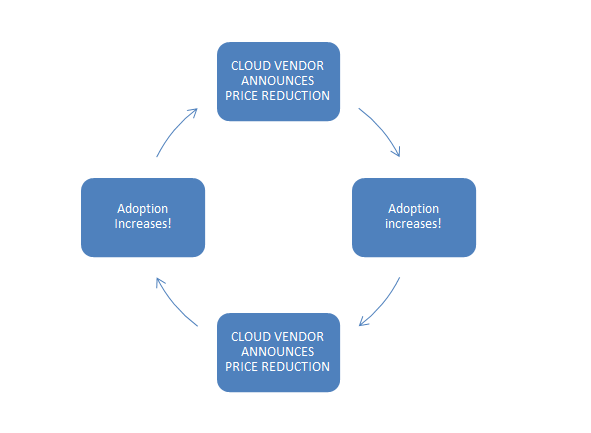 I understand that CLOUD ADOPTION is just not triggered by “price reduction”. That’s not what i mean here. But price reduction can sure act as catalyst. Hopefully, in not so distant future, the cloud prices would be so lucrative that setting up private data-centers would be a “thing of past” (unless you are governed by laws to have your own data-center or some other policy that restricts you from cloud adoption).

And I am also not comparing the price reduction “directly” because it would be like comparing Apples and Oranges. But what I hoped to point out was that we as customers would see more price reduction, more features, better experience because of the neck to neck competition among cloud vendors.